I have broken the Guinness World Record for "Fastest time to knock 15 coins off the ear of 15 participants with a yo-yo". It took me 1:33 seconds to knock off all the coins. Check out the video to see me in action. 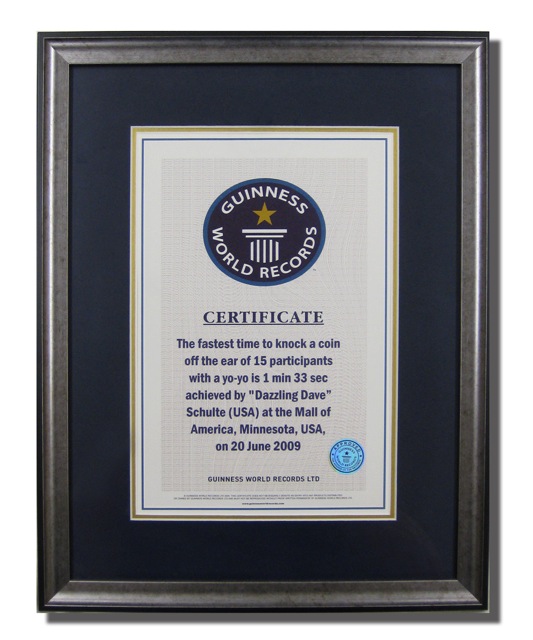 The American Yo-Yo Association is the organization in charge of testing and tracking the World Yo-Yo Records.
These are the records I have held.

120 Hops using a Dif-e-Yo Bare Bones. The record was set at the 2005 World Yo-Yo Championships.

224 regenerations. I used a Yomega Hyperwarp Heavy Wing. The record was set at the 2005 MWR Championships.

Sleep time to extinction was 58.34 seconds. I used a Doble Calypso yo-yo. The record was set at the 2004 National Yo-Yo Championships.

I am very proud of this record, it was originally set by Dale Oliver, and stood for almost 15 years until I broke it. Since that time, the record has been broken numerous times with a yo-yo designed solely to smash the record. The Yo-Yo Jam DJ is an amazingly long spinning fixed axle yo-yo that holds the record at over 3 minutes.

Dave Schulte first picked up a yo-yo as a stressed out college student in 1993, and has never really put it down since!

He started his first career as a Technology Education teacher, but his drive to learn more about yo-yos, and to teach others, has lead him to a career as a Yo-Yo Professional!

Dave travels the world teaching and entertaining with his yo-yos and spintops. If you are interested in the basic physics behind spinning things, the skill involved to learn them, or just want entertainment, contact Dave today!

"Dave was simply outstanding! From his expertise with yo-yos to his ability to relate to children, Dave provided a first rate experience. I would highly recommend this program."
Michelle Steward, Principal. Munster, IN

"Dave's show brought about good communication and interaction between the students. It is very rewarding to see the children working together to learn a new skill."
Mike Kochendofer, School Social Worker. Portage, IN

"Dazzling Dave's show was fantastic. The kids were amazed, and the teachers were thrilled with the science program. His flexibility made our school fun day a huge success."
DeAnn Robertson, PTO. Duluth, MN

"Watching Dazzling Dave and his yo-yos is like watching a happy little tornado. When he is done, your hair is mussy, and you want to leave it that way for a while!"
Lori Buffington, Fan. Blaine, MN